EMU Presented Certificates to Aid Contributors During the Pandemic Process

EMU Presented Certificates to Aid Contributors During the Pandemic Process

Eastern Mediterranean University (EMU) presented certificates to contributing business people, institutions and organisations and the “EMU Support Group”, who voluntarily worked to provide material and moral support in the name of students experiencing difficulties, due to the Coronavirus COVID-19 Pandemic. The Certificate Ceremony took place on Tuesday, 9th June 2020, at 14:00, at the Mustafa Afşin Ersoy Hall.

Delivering a speech at the beginning of the ceremony, EMU Acting Rector Prof. Dr. Hasan Demirel referred to the Covid-19 pandemic that started in China’s city of Wuhan and affected the whole world, emphasizing the difficult times experienced. From the 29th February 2020, Prof. Dr. Demirel explained that as a university, the first steps were taken with the establishment of the “Covid-19 Awareness Committee” that comprises of experts in the university, and in this way they were able to raise awareness across the campus, especially directed to students and workers, by preparing informative posterts, announcements and videos. 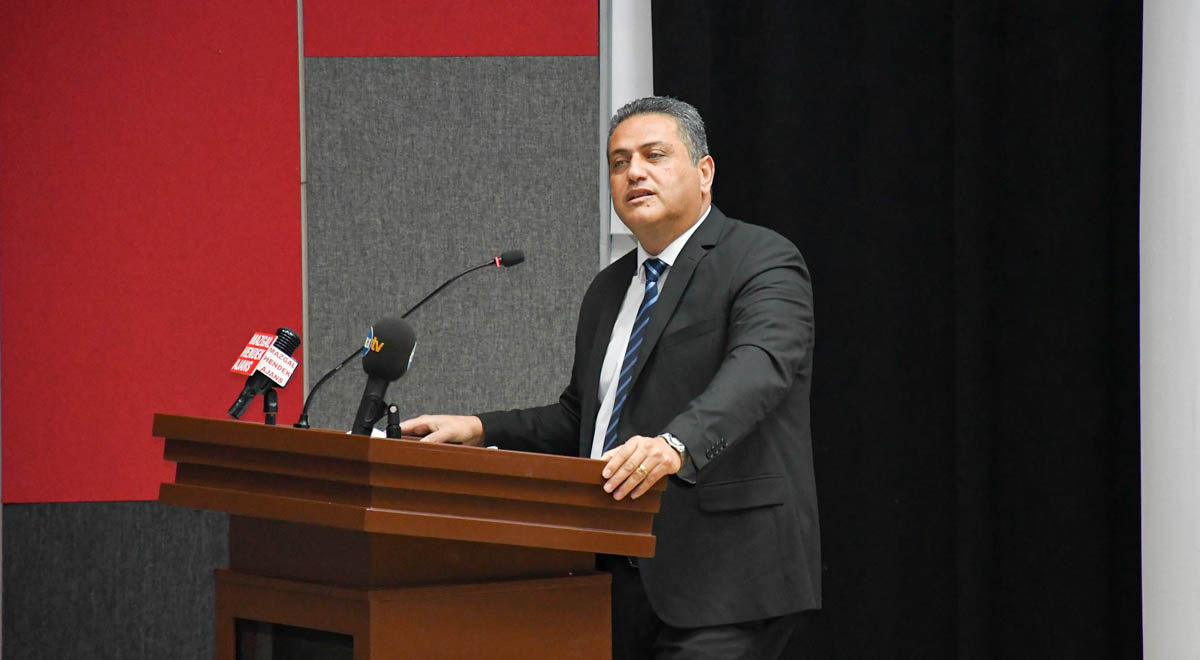 With the first positive case that appeared in the TRNC on the 10th March 2020, Prof. Dr. Hasan Demirel noted that a break was given from education, and with all the restaurants and eating and drinking locations being closed along with the application of the curfew, many of the students residing inside the campus and in Famagusta experienced difficulties.  Prof. Dr. Demirel went on to state “It is during these difficult times that the spirit of EMU once again appeared, and from the 19th March 2020, under the direction of  Prof. Dr. Sonuç Zorlu Oğurlu, a volunatary team was established comprising of academic, administrative worker staff and students.” With the efforts of the group named “EMU Support Group”, dry foods were being delivered to students experiencing difficulties explained Prof. Dr. Demirel, and then with the support of all of the EMU syndicates and material and moral contributions of many individuals, institutions and organisations in Famagusta, the students were supported very well, with all of their needs met. Prof. Dr. Demirel noted that during the process, not only was support received from the Famagusta area, but from across the TRNC, with aid flooding in to the “EMU Support Group”, and that the Tabl’dot restaurant inside the campus began to provide a food service to the students under the appropriate conditions.

“Heroes are Created in Difficult Times”

EMU Acting Rector Prof. Dr. Demirel explained the contributions that EMU made for the country. On 20th March 2020, EMU provided two genetic expert members to the TRNC Prime Ministry Science Organisation, and that on the 23rd March a Rectorate Committee was established for the EMU Support Group and also, that with the efforts of EMU Scientists, that the 2nd Covid-19 Test Centre in the country was established at the Famagusta State Hospital. Prof. Dr. Demirel explained that during this process, online education continued and students did not lag in their education, and that stated that “Difficult times create heroes. Whoever adapts to difficulties wins. During this process, as EMU, we have once again understood what proficient staff we possess.”

At the end of his speech, Prof. Dr. Demirel thanked all of the people, institutions, and organisations that stood by EMU during this difficult process. Prof. Dr. Demirel completed his statement by saying “It was a difficult process that will be hard to forget. To be able to help others during such difficult periods requires a good heart and virtue. I wholeheartedly thank our government, our ministries, unions, TRNC Civil Defense Organization, Turkish Cypriot Red Crescent, business people, institutions, organizations and everyone who contributed materially and morally.”

Following Acting Rector Prof. Dr. Demirel’s speech, individuals, institutions and organisations that contributed to the EMU aid process from outside of the university, were presented with certificates of thanks by EMU Board of Trustees Director Dr. Erdal Özcenk. After Dr. Özcenk received his certificate, “EMU Support Group” Director Prof. Dr. Sonuç Zorlu Oğurlu and EMU Faculty of Tourism Dean Prof. Dr. Hasan Kılıç were presented with thank you plaques and certificates by Dr. Erdal Özcenk and Prof. Dr. Hasan Demirel. The ceremony came to a close with the presentation of certificates to the “EMU Support Group” comprising of academic, administrative, worker staff and students, and a group photo. 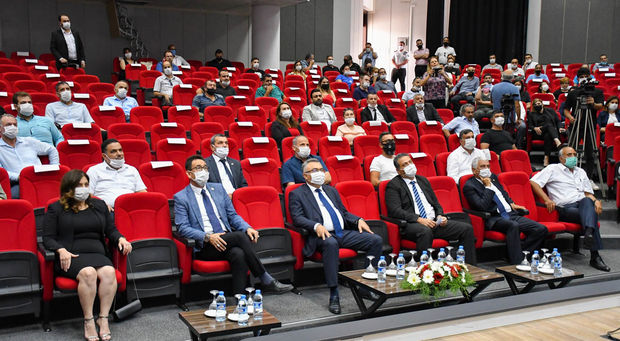 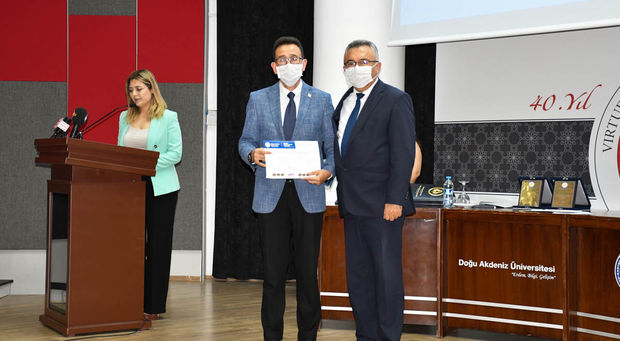 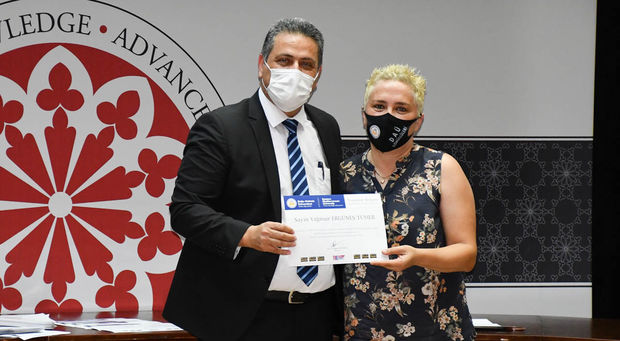 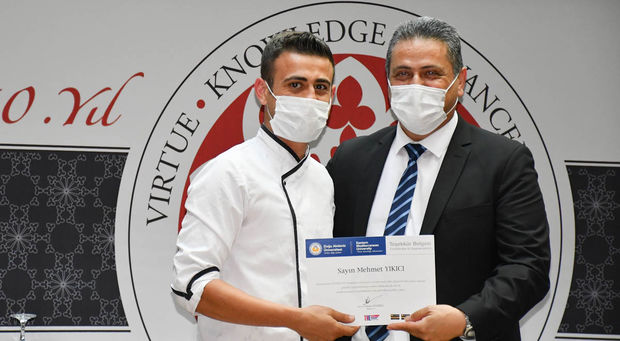 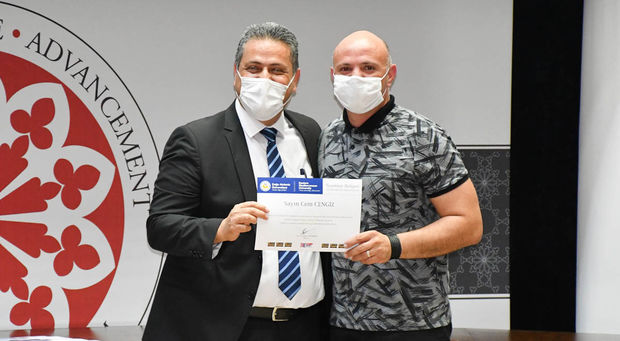 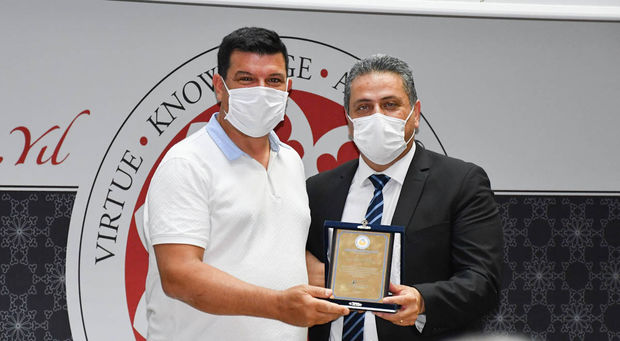 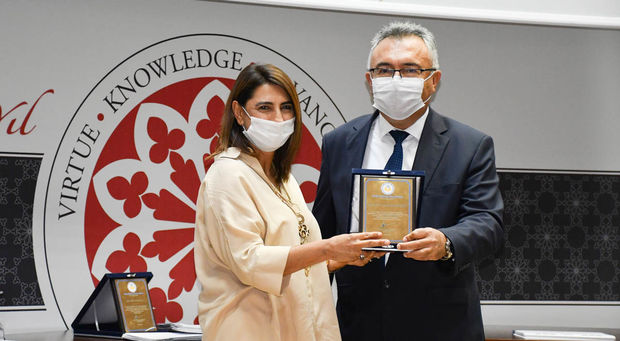 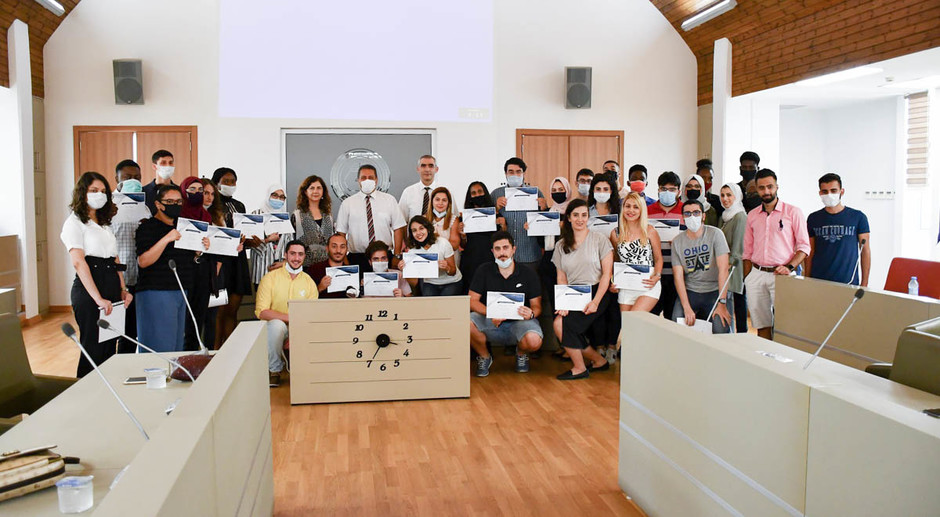 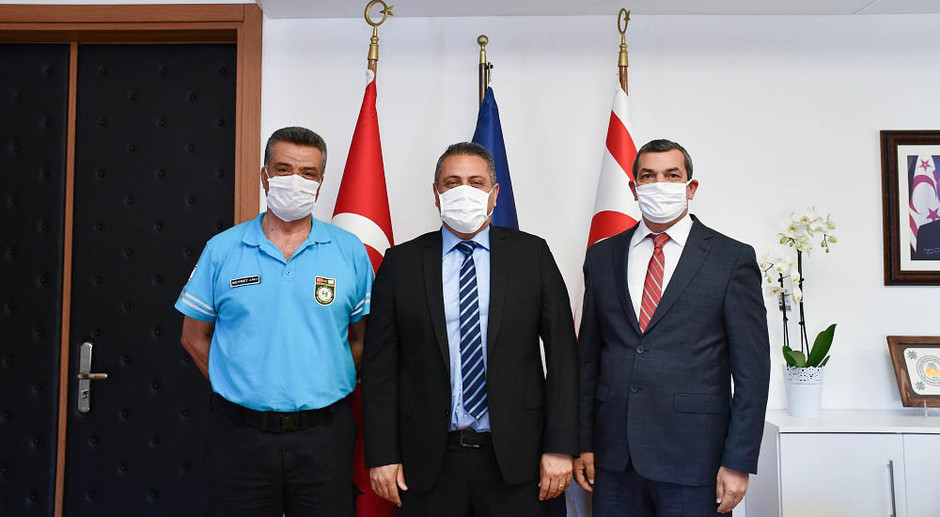 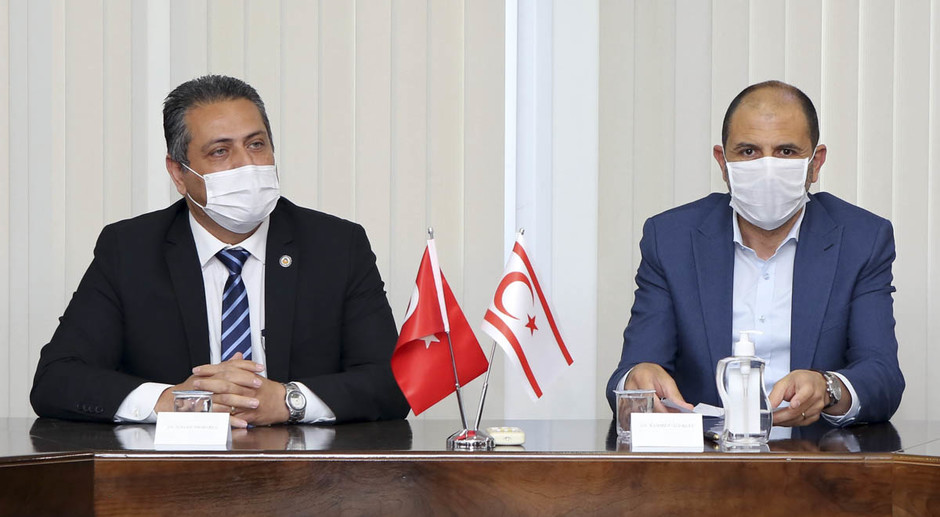 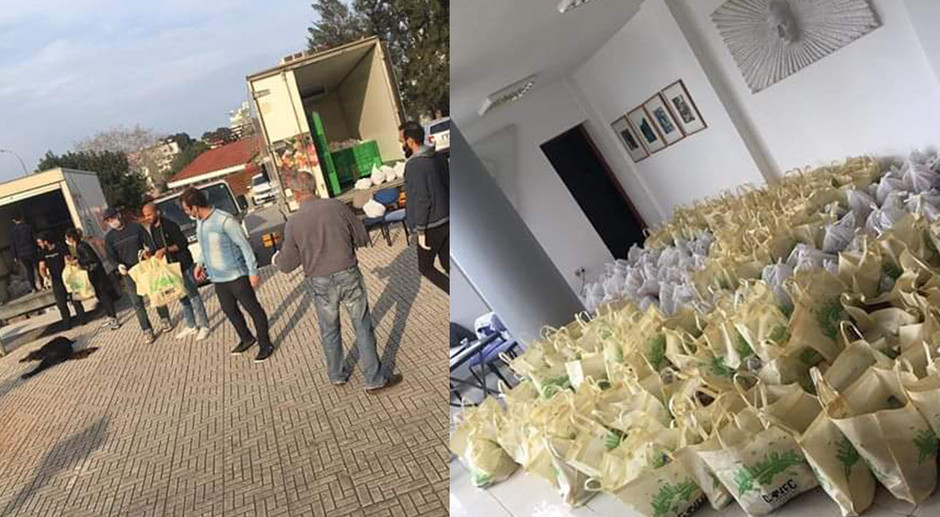 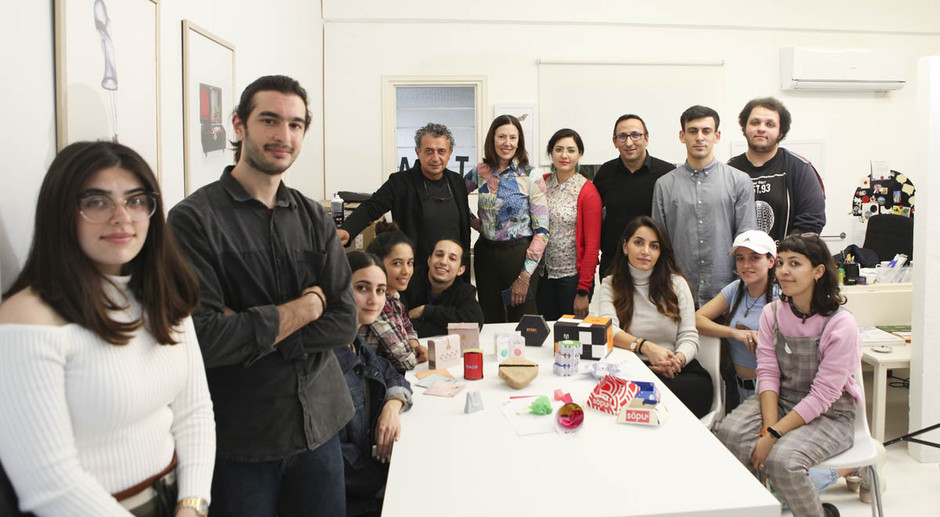 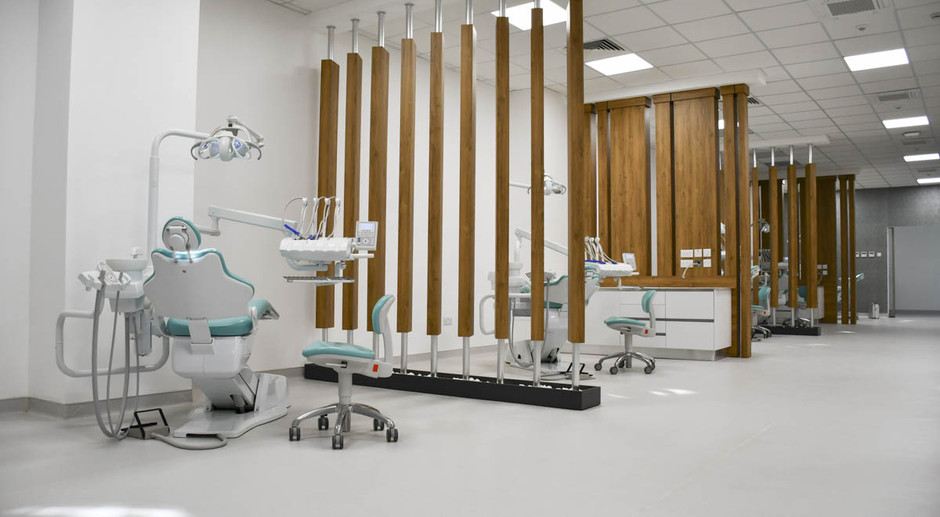